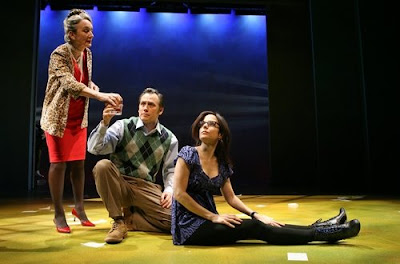 Photo/Joan Marcus
Dead Man's Cell Phone is a marvelously quirky, beautiful love story. It's incredibly specific in tone, with poetics taking precedence over sense, but between Sarah Ruhl's easy control of language, Anne Bogart's gentle aesthetic minimalism, and the cast's unequivocal focus, the show works. It is, however, marred by a sloppier second act that reaches for extremes that end up blurring the precise magic of the first (and no wonder, given that Ruhl spent a year between acts). Sloppy or not, I've got no complaints at seeing more of the magnificent Mary-Louise Parker, who despite playing a mousy, timid do-gooder, is arresting even with her short, sparing snippets of text. Her physical control (and her powerful pauses -- I'd kill to see her do Albee or Pinter) fill in the rest of the blanks, and even seem to justify the aphorisms about cell-phones that are thrown around by the other characters, particularly the cool and direct Mrs. Gottlieb (Kathleen Chalfant) and her shadowed son, Dwight (David Aaron Baker), who anchor the show. It isn't so important that we make something of dead man Gordon's (T. Ryder Smith) monologue, or of Jean's arrival in a Beckett-like hell (think Play Without Words I), so much as we let the show, with its weird, wonderful rhythms, wash over us.

[Also blogged by: Patrick]
Posted by Aaron Riccio at 8:30 PM