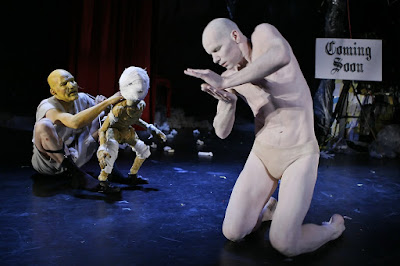 Photo/Richard Termine
The first thing Father (Kevin Augustine, as a yellow, dessicated god) does in Lone Wolf Tribe's Bride is blow his own brains out. Unfortunately for him, as Monkey (Rob Lok) reminds him, pointing out a few key lines of the Bible, he's "everlasting," and with a shudder, he awakes. What follows is his attempt to fashion a messiah for a world that won't stop calling him with their woes. Weirdly wonderful, and filled with fantastic special effects, make-up, and the most disturbing puppets this side of R. Crumb, this show is a macabre dance between Tim Burton's The Nightmare Before Christmas and some Terry Gilliam-like Brazil. This is twisted, clever, incredible theater: I strongly recommend this stark, beautiful puppet/human hybrid.