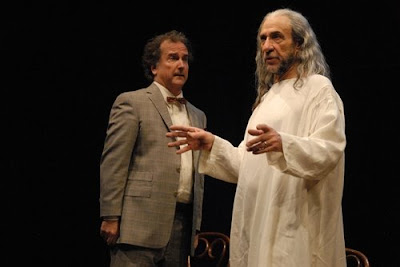 Photo/Doug Hamilton
Almost an Evening is the right name for Ethan Coen's three one-acts (now transferred to 45 Bleecker): it's almost an evening of theater. Unfortunately, the middle third, "Four Benches," is an empty punchline, and the strained final piece, "Debate," never achieves the effortlessly bleak comedy tackled so well in the opener, "Waiting." The slick, spirited cast keeps the show oiled enough to do more than squeak by, particularly Joey Slotnick, who, despite his character getting stuck in a hellish sort of limbo, is never static himself. Operating with a sense of the sublimely ridiculous, F. Murray Abraham plays God Who Judges with such Carlin-like brio that he earns a slap on the wrist from God Who Loves (a fine Mark Linn-Baker): "This is not David Mamet." No, it's certainly not. But by being acutely aware of that, Almost an Evening gets by with a consistently terse minimalism that's matched by Ilona Somogyi's old-fashioned costumes, Riccardo Hernandez's specific and to-the-point sets, and Neil Pepe's economic direction. (Only Donald Holder's lighting was off, but that's more a problem with the cues than the design.) You may have to stretch the metaphor that Young Woman and Young Man (Atlantic founders Mary McCann and Jordan Lage) use to discuss their relationship, but these plays fuck you in the pussy, not in the heart.

[Also blogged by: Patrick]
Posted by Aaron Riccio at 3:00 PM