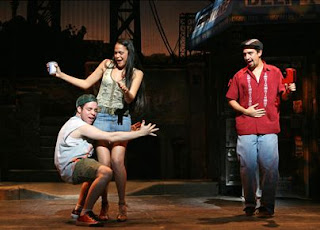 Andy Blankenbuehler can plan on a Tony Award right now: the Latin-flavored, newly-transferred-to-Broadway musical In The Heights is sure to win Best Choreography this year. The numerous ensemble dance numbers are fresh and sensational, pulling from the vocabularies of hip-hop and salsa at least as heavily as from the traditional dancing we're used to seeing in musical theatre. What's more, the dances work even more effectively on a big Broadway stage than they did when the show played off-Broadway last year. The pity is that the show's book, while certainly improved and tightened since the show's previous incarnation, is still weak and wanting: the show presents its Washington Heights barrio as if it was a hip-hop tinged Sesame Street, and the story we don't care about (will Nina leave the hood to return to Stanford?) gets more play than the one we do (will nerdy Usnavi get the girl?). But there are some terrific performers in featured roles - most notably Andrea Burns and Karen Olivio - and it's always a pleasure to see Prisciilla Lopez, even when as here her role is nothing, her song is nothing. Most appealing of all is twenty eight year old Lin-Manuel Miranda, also the show's bookwriter and composer, whose infectious warmth and off-the-charts charisma put a smile on your face whenever he's on stage. This may be his Broadway debut, but without question he is already a star.
Posted by Patrick Lee at 12:30 AM

Couldn't agree more, Patrick...I think I liked the show a little more than you did, but I walked out of the Richard Rodgers thinking, "Well, the first Tony Award has been locked: AUGUST: OSAGE COUNTY. Now the second has been locked: Andy Blankenbuehler."

Yep! They both look like unbeatable Hugh Jackman -like locks. We should compare notes when the nominations are announced: in most other categories, this is shaping up to be a wild hard-to-predict year!