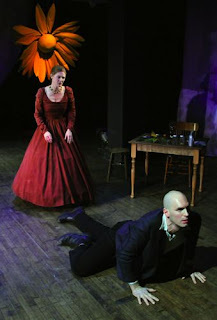 This new one-act, written and directed by Susan Mosakowski and currently running at The Ohio Theatre, has the fathers of Evolutionary Science (Charles Darwin and Alfred Russell Wallace) interacting with Mary Shelley and her fictional Frankenstein monster, thanks to the conceit of Darwin's hallucinatory fevers. It's the kind of play that gently provokes questions, such as "how do we ultimately define human?" and "should we take a flying leap forward on the evolutionary chain just because we can?" By the time the first biogenetically manufactured woman arrives late in the play, Mosakowski has thoughtfully explored many aspects of the theme, sometimes with a bit of humor and always with intelligence, but the opening scenes are on the dry side and despite an able cast the play doesn't, ahem, come to life until Mary Shelley shows up. Once she does the play-of-ideas is more lively and textured, and remains engaging partly thanks to the playwright's probing tone. It's the opposite of being hit over the head sledgehammer-style with a "message".
Posted by Patrick Lee at 11:00 PM