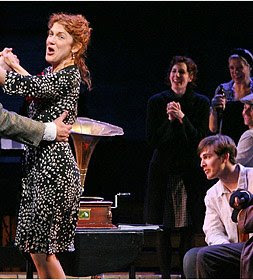 
By this time we should all know that Juno is a flawed musical. Heck, I hadn't even known of its existance until I saw a Playbill press release with Victoria Clark's photo attached (and I call myself a show-junkie). Based on the Irish play Juno And The Paycock definitely has all the ingredients of a great musical- political drama, romance, comedy, tragedy- but it just seems like the creators didn't know how to stir it all up properly. Obviously, though, as usual City Center has dressed this production up with a dream director (Garry Hynes) and a dream cast and has fashioned a wonderful history lesson on what it was like to be a flop musical in 1959. Victoria Clark is stunning as the matriarch and title character and Tyler Hanes as the one armed dancing hot guy, continues to force me to be obsessed with him.
Posted by David Bell at 12:58 AM