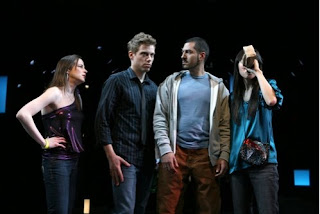 Playwright Adam Bock has given himself a strenous exercise: he's written a play in which all of the characters are sloppy drunk right from the get-go. It's an engaging idea but at the early preview I saw it hadn't yet amounted to anything more than an exercise: once I was done marvelling at how accurately some of the actors sustained the illusion of being intoxicated (particularly good are Barrett Foa and Maria Dizzia) I realized how little room there was to care about the characters. Bock might be aiming for, but hasn't credibly gotten at, the "true nature" behavior that can be revealed by over-boozing. Although there are random, too-brief moments when the actors freeze and more soberly reveal what they're feeling, the play's tone is situation comedy, and there aren't enough funny shocks of recognition to put it over. (Two nice exceptions: the nifty entrances that begin the play, and the meet-cute between the characters played by Foa and Alfredo Narciso.)

Also blogged by [David], including a discount code.
Posted by Patrick Lee at 12:58 AM