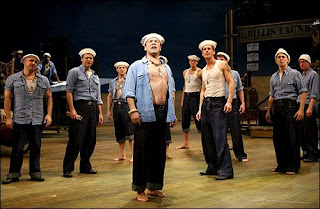 Lincoln Center's new revival of the Rodgers & Hammerstein classic is lush and beautiful: the production doesn't skimp on the number of musicians in the pit or actors in the ensemble, and the sets - from the forced perspective sand dunes to the giant rotating airplane - also look no-expense-spared. The show is rich in gorgeous classic show tunes - "Younger Than Springtime," "There Is Nothing Like A Dame," and "I'm In Love With A Wonderful Guy" are but three that have since achieved songbook standards status - and generally they are well-performed in this production. But I have to confess that while South Pacific may be my favorite Rodgers & Hammerstein score, I've never warmed to the Pulitzer Prize-winning book - everytime the military men pull out maps my eyes glaze over, and being asked to buy the dramatic convention of love-at-first-sight with not one but two couples in the story has always turned me into a tightwad. However, the show's heartstrings-pulling second act usually pulls me through (capped by the handkerchief-worthy double-hit of "You Have To Be Carefully Taught" and "This Nearly Was Mine", both splendidly performed here) as do charismatic performances. Two weeks into previews, some of the principal performers are not yet where they could (and probably will eventually) be: Kelli O'Hara hasn't yet found enough "hick" in her Nellie Forbush, for instance, and Paulo Szot - an opera singer making his natural and charming Broadway debut as Emile - needs to find more levels in his performance. Danny Burstein, on the other hand, is in ready-to-open spot-on shape as Luther.
Posted by Patrick Lee at 8:45 PM

I'm going to see "South Pacific" in May. It'll be my first time seeing R&H on stage, so I'm excited. I agree with you about the score. I love "Oklahoma" and "The King and I," too, but there's something special about the music in "South Pacific." It's funny and romantic and poignant. Last week I listened to the concert version for the first time in awhile, and something just clicked. I thought, wow, this is great. I fell for it in a way I hadn't before.

Come back and tell us what you think of the production! I would like to go again, after it opens, but something tells me this already tough ticket is going to become next to impossible very soon.