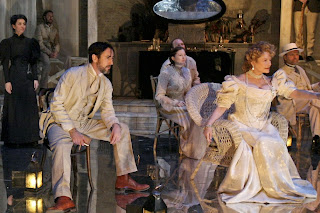 How are Dianne Weist and Alan Cumming in CSC's new production of The Sea Gull? They're both woefully misdirected and often adrift, but since that's also true of nearly everyone in the cast, the blame surely belongs elsewhere. The ensemble isn't the least bit cohesive - each actor seems to be in a different production, and only David Rasche (as the Doctor, Yevgeny Sergeyevich) seems to be in a production you'd want to see. Otherwise, there are counterproductive choices made throughout that prevent this production not only from having a cumulative emotional impact but also from making any kind of thematic sense: even the notes that confidently sound in any average production of this play are missed or not attempted. There's a doozy of a directorial choice near the end of the three-hour play that I won't reveal. I'll only say that it's misguided and part of the reason why this production's climactic Nina-Konstantin scene is the weakest I've ever witnessed, unless Drowning Crow counts.
Posted by Patrick Lee at 12:21 AM

David Rasche is one of the most underrated actors. He's consistently good, even when those around him aren't.

You say that every actor seems to be in a different play. I think that's a consistent weakness of recent revivals of the classics, from The Sea Gull at the Delacorte to Heartbreak House at Roundabout to, well, practically any classic done at Roundabout.