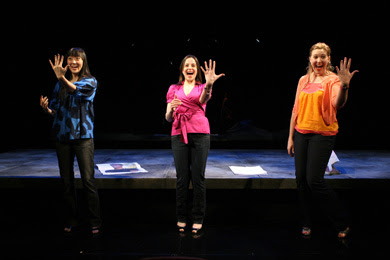 The characters of The Drunken City all suffer from either loving too hard or being loved too hard; the problem is that just as the actors slip so well into the drunkenness of their roles, they also end up either overplaying their parts (Barrett Foa), or not going far enough (Alfredo Narciso). However, for this giddy, bubbly midnight hour (and twenty minutes) of play, Adam Bock totally pulls us into his world, with an exaggeratedly lush comic tone that turns into a rich, dry drama about the men and women trapped on the shaky ground of love (literally, thanks to David Korins's slick, sleek set). Trip Cullman's direction uses a chic and minimal modernity that fits "the City" and his actors, though sometimes unbalanced alone, make a wonderfully sloppy chorus. Cassie Beck, as the pressured Marnie, is a marvelous anchor, not wasting a single drop of talent even at her tipsiest; Maria Dizzia, as the jilted Melissa, makes the switch between carefree and cautious go down smoothly; and Sue Jean Kim, as Linda, is always good for another shot of comic relief.