Drunk Enough To Say I Love You 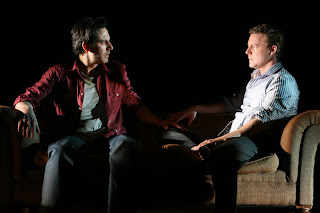 The playing area seems nothing but a black void except for the loveseat where Sam (the American) and Guy (the Brit) have a man-to-man entanglement that looks like an unhealthy enmeshed love affair. But only the slightest amount of personal specificity is given and it's quickly clear that what we're hearing out of their mouths is not the talk of lovers but of two nations in bed with each other, with (Uncle) Sam bending Guy to his greedy, destructive will at every turn. The two don't even need to finish their own sentences - even their intimate, casual exchanges are jagged fragments spiked with loaded foreign policy buzzwords. They talk in commonplace, intimate tones of epic-scale horrors: the effect (most especially in one scene where Sam, curled up under a blanket, coldly lists methods of prisoner torture until his masochistic lover returns) makes for boldly provocative, politically charged theatre of a blood-curdling potency. The fourty-five minute play (yes, you read that right, and it feels precisely the length it should be) might sound in the retelling like a crafty, overly academic exercise, but it isn't: it is driven by a such a palpable moral outrage that despite its not-one-extraneous-word polish it often feels like it was borne of one explosive burst of focused anger. The playwright (Caryl Churchill) even finds mitigating moments of dark humor without letting its fueling rage below a boil. I wonder about a thing or two (shouldn't Guy be a good deal older than Sam, for instance, to keep with the metaphor?) and I must admit that the play's relentless condemnation of American policy and of Britain's spineless submission to it could easily shut down some theatregoers as it opens up others. But whether you agree with Churchill's overarching statement or not, this is jolting, must-see theatre that wants to disturb and strongly provoke us, and it does.
Posted by Patrick Lee at 10:30 PM