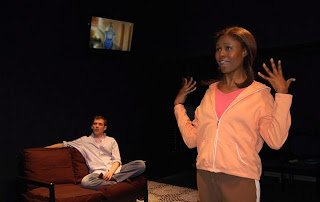 If I'm going to believe that two seemingly well socialized young urbanites - Lia, a straight black woman, and Ben, a gay white man - conduct an intimate years-spanning friendship only through written letters even though they live across the hall from each other, I'm going to need a lot more convincing than I got from Garret Jon Groenveld's play Missives. The playwright clearly intends for their letters to strike us as deeply personal and revealing, but that's where he's most wrong: nothing the two write to each other is so naked or humiliating as to forbid face to face contact, so the premise that they continue to avoid anything but letter-writing begins to grow precious. The play is mostly a flashback, framed by Lia giving us direct-address information that immediately drains any suspense out of the show: it isn't until late in the first act when Ben gets a boyfriend (played with vibrancy and endearing vulnerability by Ryan Tresser) that the play has any measure of dramatic conflict. As Lia, Shamika Cotton builds judiciously to the play's final emotional scenes and it's to her credit that she got me to feel something long after I went numb on the play (which was about half an hour earlier, with the second-act introduction of a character right out of crime-drama stock).
Posted by Patrick Lee at 12:29 AM