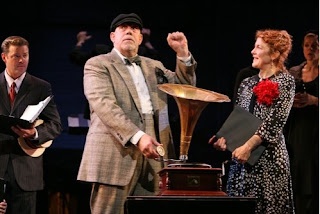 Watching this Encores! version of the 1959 musical based on Sean O'Casey's downbeat tragicomedy Juno And The Paycock, it is easy to see why the musical was not a success when it premiered: too much of the first act tries, counterproductively, to provide levity and merriment and the source material resists being reshaped to oblige. It is also easy to see why the musical has attained some measure of cult status: the score (by Marc Blitzstein) is a shining gem, a sophisticated and dramatically expressive collection of Irish-tinged songs that range from the stirringly anthemic to the delicately lilting. However problematic the show, this astutely directed, often gloriously performed staged-concert production (directed by Garry Hynes) showed the piece to spectacular advantage: what worked here worked magnificently, and what didn't work probably never could. As the put-upon, salt-of-the-earth matriach of the hard-luck Boyle family, Victoria Clark gave a detailed and superbly judged performance that honored the spirit of the material. This was not the kind of performance where the diva plays poor and downtrodden while winking to the audience that she's only "acting": Clark disappeared into the role. Celia Keenan-Bolger rendered the Boyle daughter with touching vulnerability: the show's musical highlight was the mother-daughter duet of "Bird Upon A Tree", a deceptively pretty but deeply sad song that expresses their mutual longing to be freed from their hardships. (A second noteworthy highlight: the lovely ballad "One Kind Word" as superbly and sensitively sung by Michael Arden.) Although the pathos in the show's opening number - in which Dublin's Irish witness one of their own being murdered in the streets - was played so broadly that I half expected to see Officer Lockstock and Little Sally among the ensemble, the cast seemed otherwise at the right pitch for the material. Of special note were the male dancers (led by Tyler Hanes, playing the Boyle son who'd lost an arm fighting for Ireland) who performed a spellbinding and physically demanding second-act dream ballet as choreographed (with vital dramatic expressiveness) by Warren Carlyle. For me, Juno's most lingering stage picture is of those five dancers leaping through the air in unison, each with an arm behind his back under his shirt.
Posted by Patrick Lee at 12:59 AM