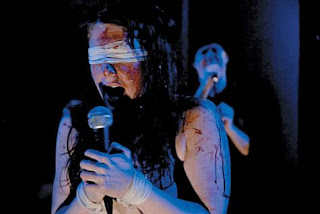 In this risk-taking, altogether unique and strikingly unsentimental indie-rock musical, Jim (a Pentagon contractor) and Jennifer (a news reporter) are blindfolded and held hostage in a dingy cell somewhere in an unnamed foreign country. There isn't any rising action, by design - the show is a series of riffs on the prisoners' situation rather than a conventional narrative, with hard-driving, grunge-tinged songs punctuating the wholly convincing book scenes (which are remarkable for their skillful blend of cold-eyed dread and gallows humor). The result is certainly vivid and it's easy to see why discerning freshness-seekers have turned this little downtown musical into a tough ticket: the show defies music theatre conventions both in subject matter and form. Yet in the end the terrific songs (by Kyle Jarrow) and the accomplished, haunting book (by Clay McLeod Chapman) add up to less than the sum of their parts: a little more plotting would change that and make the show more unified and satisfying. As the hostages, Hanna Cheek and Paul Thureen are especially remarkable for conveying a range of emotions while blindfolded and unable to show the audience their eyes. Abe Goldfarb scores with his perfectly judged delivery of an especially haunting monologue that is, for me, the show's most powerful scene.
Posted by Patrick Lee at 12:40 AM