Kiss Of The Spider Woman 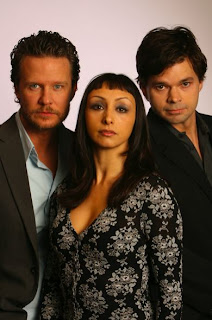 This top-notch revival of the Kander & Ebb musical (at Signature, in Virginia) deviates from productions I've seen before by always keeping Molina, the fey window dresser serving time in a brutal South American prison, front and center. Molina's fabulous musical-number fantasies of screen goddess Aurora are generally not allowed to completely take over the stage: we never forget that they are products of his imagination and his means of momentary escape. This focus makes solid dramatic sense and strengthens the story's thematic throughline: as Molina develops feelings for his cellmate Valentin (a political prisoner who is initially disgusted by him) it's more clear than I've ever seen it before that the musical, which both celebrates and cautions against escapism, is essentially organized to follow Molina's maturation from his adoring fan-love of Aurora to his real-life love of Valentin. Seemingly in the interest of containing the fantasy numbers within the reality of the prison, Aurora is always dressed in black: I think that's overdoing it, as the production is so strong that it could afford to give us a flash of Molina's "technicolor dreams" and still make its point. I'd have a hard time coming up with anything else to quibble about. It's no surprise that Natascia Diaz is a knockout as Aurora - whether she's the sensational center of a dynamic dance number or she's haunting the peripheries of the stage with foreboding mystery, Diaz projects the tantalizing allure of a movie star: we instantly believe that her Aurora is an obsession-worthy, authentic screen icon. (It's often said that it takes a star to play a star: you do the math) What is surprising is that Will Chase and Hunter Foster, actors who wouldn't immediately spring to mind to respectively play Valentin and Molina, are both riveting. Chase delivers a heartfelt "Marta" and a stirring "The Day After That" but, more to the point, his performance is distinguished by its avoidance of seeking audience sympathy: he's deep into playing the role and gives no impression of trying to manage what we eventually think of the character. It's at first a shock to see Foster going femme-gay as Molina but the strength of his acting gets us to quickly recover and believe it: half-measures wouldn't do here and Foster fearlessly goes full force into the swish zone. His resounding success with the role is he makes the affectations seem to organically come from the character's insecurities and timidities: his limp wrists are expressing character from the inside out, not defining it from the outside in.
Posted by Patrick Lee at 9:27 PM