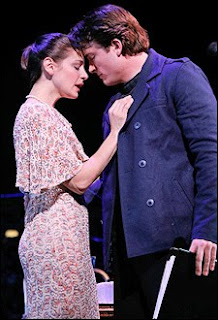 photo: Joan Marcus
Is it too early to call James Snyder the discovery of the year? Maybe, but this young singer-actor--previously seen in the ill-fated musical adaptation of Cry-Baby and heard on the studio recording of Bare: A Pop Opera--makes a huge, unforgettable impression in the concert production of Harold Rome's Fanny, at City Center through Sunday. As Marius, a young man so enamored of the sea that he abandons the woman he loves (Elena Shaddow, the title character), Snyder projects smoldering emotions, and sings with a tremulous tenor that cuts through the score's haunting ballads. His recitation of the title song, in which his beloved's name is repeated several times, will not soon be forgotten. Shaddow is also stunning; her shimmering soprano sounds like a remnant of Broadway's bygone golden age. The always dependable Fred Applegate does a beautiful job with Panisse, the man Fanny marries after Marius sets sail, and George Hearn--though sounding a bit tired--is endearing as Marius' stern but caring father, Cesar. The entire production, from top to bottom, is the most satisfying that the Encores series has presented in recent memory, and in a perfect world would be preserved on a cast album. One performance (and plenty of tickets) remains: miss it at your peril.
Posted by Cameron Kelsall at 11:12 PM