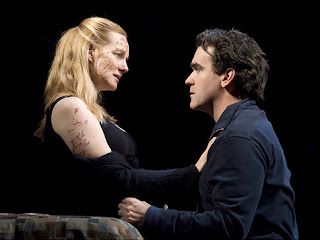 Some spoilers below, but not the major ones.....

I scrolled through almost all the reviews of Donald Margulies' Time Stands Still and find myself in the curious position of having taken a different meaning from it than others I've read. I saw the play as an affirmation of the social consciousness of the artist. Not that anyone in the play calls noted war photojournalist Sarah Goodwin (Laura Linney) an artist although they come close and not that there's a halo drawn over her head. As the play opens she returns home to her Williamsburg loft physically scarred and weakened after a car bomb explosion. She soon makes it known that she intends to be back on the job documenting war as soon as she is strong enough, but her near-death experience has put other ideas in everyone else's heads. Her partner on and off the job James (Brian D'Arcy James) just wants to be "comfortable" at home rather than go back to work yet again in a war zone. Her good friend and editor Richard (Eric Bogosian) may profit from her work, but he just wants her safe and sound and tries to tempt her into assignments close to home, a sentiment echoed by his new younger girlfriend Mandy (Alicia Silverstone) whose social consciousness doesn't extend far beyond her own occupation as an event planner. What can she do as a regular person except feel bad when she sees war images, she asks rhetorically, evading any identity as a citizen of the world. At the top of the second act James has some lively business damning the "manufactured experience" of some unnamed piece of socially conscious war-themed theatre he recently attended: it's a rich irony considering that he's begun filling up his days writing articles about horror movies. At the core of it, he's saying he's given up on art (just as he will later give up on journalism) affecting any change in the world. The people all around Sarah aren't selfish monsters - they're fundamentally good people we recognize who just want to take care of themselves and their own happiness. It's no wonder that she begins to doubt her calling and to struggle with whether she is doing social good in her work or is just a "ghoul with a camera" turning a profit on suffering. I found the play consistently thought-provoking to a thrilling degree and the production (directed by Dan Sullivan) to be pitch-perfect. All the performances are excellent - Linney especially is revelatory, fully believable at every moment and giving a compelling performance by dint of its constant truthfulness. I can't imagine there's going to be a richer, more riveting performance on Broadway anytime soon.
Posted by Patrick Lee at 12:14 PM