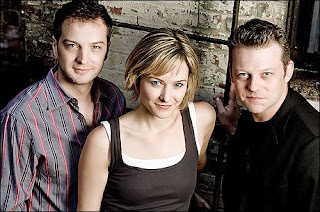 The production of Chess at the Signature Theatre in Arlington, VA, directed by Eric Schaeffer, is the umpteenth version of a show that started as a concept album and still hasn't made it to solid musical theatre. The score, by Abba's Benny Andersson and Bjorn Ulvaeus, is energetic and frequently engaging, but many (most?) of the numbers lack the character revelation and dramatic arc that distinguish theatre songs from other sorts of music. The book's combination of love triangle, chess match, and geopolitics never gels, and many characters are given little, well, character. Euan Morton is wonderful as Anatoly, the Russian chess player, giving him a dimension and reality far past what's written. Jeremy Kushnier does pretty well with the obnoxious American chess player Freddie, although he is hampered by the character's sheer unlikeability. Jill Paice as Florence fails to take advantage of some of the best songs in the show to create a emotionally believable character. In singing the elegant "Someone Else's Story," she seems unaware of what the song means and too focused on showing off her (sometimes annoying) voice. Among the supporting cast, Christopher Bloch stands out as Anatoly's second, Molokov, and Eleasha Gamble sings beautifully as Anatoly's wife Svetlana, although her acting is marred by theatrical pauses that would put Elaine Stritch to shame. Chess is a reasonably entertaining evening in the theatre, but it would be no less entertaining simply to listen to one of the recorded versions, particularly the Original Broadway Cast CD with the amazing Judy Kuhn as Florence.
Posted by Wendy Caster at 1:16 PM

I thought I remember a re-working of CHESS looming on the horizon at one point...am I wrong? A fascinating show with even more fascinating problems.

I think there's ALWAYS a re-working of Chess looming on the horizon. This version at Signature may be the one you read about, however.