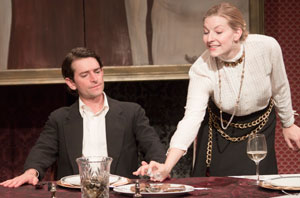 Thomas Bernhard may be one of Europe's great postwar writers but his plays are rarely seen in the US. This is a shame. The production of his Ritter, Dene, Voss which opened last night at La Mama has percolated since 2006, and it is a thing of finished beauty. Two sisters, wealthy actresses who perform only what and when they choose, prepare for the return of their tubercular philosopher brother from a sanatarium. Painfully, like the turning of a screw, the sisters exercise the frictions of their lives. Bernhard's fluid yet joyfully abrupt language (translated by Peter Jansen and Kenneth Northcott) is the river from which the true, sad, spiritually ugly faces of the repressed Dene (Maev Beaty) and the looser, spiteful Ritter (Shannon Perreault) swim into startling focus. When Ludwig finally arrives the tension has reached a high pitch. What will he be like? What will he do? Equally important, will he spoil the play, so brilliantly constructed so far? Bernhard's play first meets, then defies expectations, with enough linguistic flair and dramatic panache for two or three plays. Director Adam Seelig and his superb cast wear this wonderful work like a surgical glove.
Excerpted from Theater Review (NYC): Ritter, Dene, Voss by Thomas Bernhard on Blogcritics.