3 Shows With a Black Thread

I didn’t go looking for shows about people of color, didn’t have an agenda in grouping these three together. I simply happened to see them about the same time and, since all had been running a while, decided to review them at once.

The message in Stick Fly is pretty simple—rich people can be assholes regardless of race; and just because George and Weezie moved on up doesn’t mean they brought anybody else along for the ride— the have nots have been caste aside, left behind, and without a place at the table. The only way into the dining room is through the bedroom. It suggests race has evolved to a white versus black conversation, but economic disparity gets stuck in your throat.

It is a more intriguing idea than it is a play, mostly because nothing very surprising happens. Dialogue is a lot less riveting when you are able to see it coming, pick a side, and write a rebuttal in your head. The best to be said about Lydia R. Diamond’s play is that it exists. She’s done little more than take the Huxtables on vacation and make them hateful. The plot is more edgy but not much more insightful than a sitcom episode. Kenny Leon doesn’t add much as far as mining between the lines for drama.

The star of the show is David Gallo, the set designer. He has created a world that tells you both who and where these people are. Actually, he tells you more about the fictional inhabitants than those cast to inhabit the fiction.

Ruben Santiago-Hudson as the family patriarch who married into money, carried the burden of head-of-household while feeling a guest who could be disinvited at any moment, plays the role as little more than a philandering asshole. Mikhi Phifer, trying to fill his father’s boxer shorts, is a philandering asshole. Dule Hill, breaking the mold, is a philosophizing asshole. The female cast really mixes it up. Tracie Thoms, poor by divorce and discarded by a rich and noteable father, is shriekingly annoying. Rosie Benton, engaging in helping the poor as emotional porn and cleansing conscience through do-gooding, is annoying at inside-voice decibles. Condola Rashad (the daughter of real-life Mrs. Huxtable), is broodingly annoying for three quarters of the play, then unloads for the pivotal twist that comes a couple of hours too late in the evening. She has the chops, delivers the goods, and it might have made for a stronger play had the maid played a bigger role.

Kudos to Alicia Keys for producing. Putting more African American actors to work and putting more African American characters at the center of that work makes theatre better—moving on up to the front of the stage is only a good thing for all of us, on both sides of the proscenium. I just wish there was a stronger play waiting once we all got there.

The Road to Mecca

Athol Fugard gives us an opposite view of the character of color in the apartheid-era play, The Road to Mecca—none make the stage and barely make mention. The story is actually only set in the time of apartheid, it isn’t really about that. It isn’t really about much at all. There may be something in there, but it is too convoluted to care.

There isn’t much story, and there is even less drama. It was a thrill to see Rosemary Harris on stage; but neither the role nor the performance is worthy of her legend. Carla Gugino delivers some spark but not much fire. Jim Dale arrives late and leaves early and neither much matter—not his fault. The play sets him up to be the desperately-needed crux of the story, but this lame drama needs a crutch before it is ready for a crux.

The worst I can say about this play is that it exists. It is just boring. Who cares? There’s ten minutes of drama draped in an evening of blather. I am no better for having met these people. No closer to Mecca having traveled their Road. If you need to have your life shortened by a couple of hours, this is the euthanasia for you. 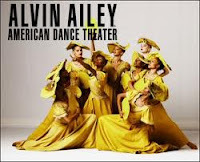 Yes, the show has closed for this winter, but it will be back at the end of the year; and it is never too early to make it a priority. I make it a point to see Alvin Ailey at City Center every year. A year without Revelations is no revelation. This year, I caught it twice.

The first time was less than perfect. The seats were far right, and while I like to move around from year to year for perspective, something gets lost at the extremes. My favorite way to see the show is in the first couple of rows. The tickets are $25, the view is thrilling, the intimacy is eye-opening because you can see the incredible work, talent, and control on an individual basis. You trade shape and scale for individual perfection. That perfection is especially clear when watching the solo number, I Wanna Be Ready, which was performed in rotation this year by two guest artists, Clifton Brown and Matthew Rushing, both long-standing, stand-out members of the company. They couldn’t be more different (two master classes, Brown’s in precision and Rushing’s in personality). If these two dancers are not on your list of not-to-be-missed performers, add them, remember them, and see them.

You can never go wrong with an all-Ailey evening. Someone else bought my ticket on the first visit, so it wasn’t all-Ailey and what could go wrong did. The first number, some assault choreographed by Geoffrey Holder, was barely bearable. It was followed by something forgettable, choreographed by Judith Jamison. Even Revelations was diminished by some ill-advised, “special” event that included members of Ailey II and some children from Ailey Elementary or some such. It was too many people adding little. I’m not a big fan of other people’s children to begin with and certainly wouldn’t knowingly attend their annual recital.

I couldn’t let that be my experience for the year, so I returned, this time sitting in the balcony. It couldn’t have been a more different experience. The evening started with Anointed, choreographed by Christopher L. Huggins. What a thrilling beginning. The final movement of the dance is as emotional and moving as anything I have ever seen. The second, a hip-hop number, Home, choreographed by Rennie Harris and inspired by photos and essays submitted for the Fight HIV Your Way campaign was excellent, although I wish I hadn’t known in advance about the supposed subject matter. I expected more of a connection. It turned out to be a lovely hip-hop number. I just missed the inspiration. Finally, Revelations renewed my faith. Fix Me Jesus was absolute perfection.

Revelations is a quintessentially African American story, but it’s emotions and arc and connection are universal and for me, simply essential.

Posted by Rodney Sexton at 2:26 PM