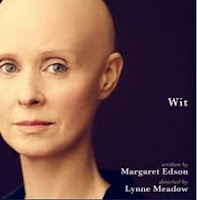 Wit is a difficult play. The lead character isn’t particularly likeable on the page, but the audience can’t merely feel sorry for her. The metaphors and deconstructions of 17th Century poetry are a tricky set up that can take you to places both sentimental and pretentious, simultaneously. The Brecht meets cancer formula flips you two birds and dares you to care.

Playwright, Margaret Edson, litters the page with landmines; but the well-navigated path can lead to a thrilling experience that moves you and makes you think.

I first saw a production at the San Jose Repertory Theatre a few years ago. It was powerful, devastating, personally deconstructing.

The experience of the Lynne Meadow-directed production at Manhattan Theatre Club is too many landmines and the dreaded sandtrap—it’s just plain boring. Cynthia Nixon seemed uncomfortable in the lead role and was all too aware that her character is cold, impersonal, and unpleasant. She works hard to please, begs us to like her, but descends pretty quickly into over-articulated shrieking. She performs. She plays angry, hostile, mean, desperate, and lonely—all with an apologetic tone—even before the character has come to realize she has anything to apologize for. She is actually best (and, yes, she is devastating) in the moments when she has no lines to speak, no sins to confess, and just focuses on the war raging inside her.

I often, admittedly cynically, wonder when so many secondary characters are played ineffectively if they’ve been cast with the intent of helping the star shine. Otherwise, it’s just bad direction. The supporting cast here is mostly mediocre. Suzanne Bertish, however, shines brighter in five minutes on stage than all the lights of Broadway. Her final scene in the play is sublime, gut-twisting, perfection.

If you didn’t see Kathleen Chalfant or Judith Light in the original, you probably owe it to yourself to see the play. While this production doesn’t shine the best light on Wit, there is enough to reflect, to see that none of us can fully deconstruct death, no matter how you punctuate it.