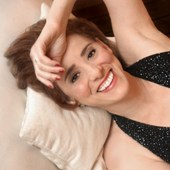 Although she hasn't had their careers or received similar amounts of attention, Judy Kuhn belongs on that list. Her voice is splendid and her acting is subtle and smart. And in her cabaret act, currently at Feinstein's, her talent soars. You want gorgeous singing? Listen to Kuhn's versions of Sondheim's "Happiness" and "In Buddy's Eyes" or her sinuous take on Leonard Cohen's "Dance Me to the End of Love." You want heartfelt, complex acting? Watch Kuhn provide a woman's entire being in Billy Barnes's "Something Cool" and a heartbreaking demonstration of, well, heartbreak in Randy Newman's "Losing You." How about sexy fun? Try Kuhn's delightful takes on "I Love the Way You're Breaking My Heart" (Louis Alter and Milton Drake) or Oscar Brown Jr.'s "Forbidden Fruit."

And what about her range? She's comfortable, excellent, in pop, jazz, Broadway, folk, American Songbook, art songs, novelty songs. You name it, she can sing it and express it and live it.

Kuhn is also smart enough to work with a truly amazing band. Percussionist Greg Joseph, playing cajon and djembe rather than a traditional drum kit, does a remarkable job of providing intricate, enticing rhythms that are both necessary and subtle. Peter Sachon's cello playing adds emotional depth and smooth radiance. Musical director Dan Lipton on the piano has a sure hand (sure hands, I suppose) in both his elegant playing and his impeccable direction. Any of these musicians would be a treat as a soloist; making up a seamless foursome with Kuhn, they are even greater than the sum of their very impressive parts.

After the show, I chatted with a couple at the next table. They said that they were from Atlanta and that New Yorkers are incredibly fortunate to be able to go to such high-quality performances. Who could argue?

(By the way, Feinstein's is working to be more accessible, and Kuhn's shows have $30 non-premium tickets--which are really more like $40 tickets with the insane fees and taxes--with a $25 minimum.)