My Occasion of Sin


(Caveat: at the performance I saw, not one, but two, women crumpled plastic bags on and off for the whole 100 minutes. They were really annoying, and they made it impossible to concentrate fully. So take this review with however many grains of salt you consider appropriate.)

In Monica Bauer's well-meaning but not-quite-successful play, My Occasion of Sin, it's 1969 in Omaha, Nebraska. George Hollewinski, a Polish musician and music teacher, hires Luigi Wells, an African-American drummer, to teach at his store. George's wife Helen is glad that George is finally acknowledging the existence of rock and roll, but wary of Luigi. Mary, a young student of George's, is thrilled to put down the accordian and pick up the drum sticks, cheerfully eager to disprove Luigi's belief that drums are not for girls. The four people's needs, desires, assumptions, and even innocence rub raggedly together, sending up dangerous sparks in a world about to explode.

The play also has a fifth character, Vivian, an African-American girl in her early teens who doesn't interact with the others, speaking to the audience directly. 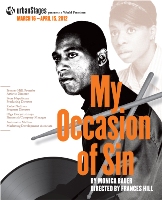 Using actual events and people as her inspiration, Bauer works hard to present a complex situation where good people can unknowingly be bad and even people who strive to be better can end up destroying what they want to build. The problem is that her characters are not real enough to support this level of ambition. The wife Helen, in particular, consists of traits that never cohere into a breathing person (it doesn't help that actress Janice Hall has not found a way to give her depth). It's also impossible to accept that Mary could be as completely innocent/oblivious as she is--though she is in other ways a wonderful character, beautifully acted by Rosebud Baker. George (Scott Robertson) and Luigi (Royce Johnson) are more believable; Bauer has given them more depth, and the actors do much to bring them to life.

And then there's Vivian, who exists unmoored in the play. She comes onstage, she talks, she leaves. On, talk, off. On, talk, off. We eventually find out who she is and where she fits in, but for most of the play, her lack of grounding is disturbing. However, Danielle Thompson's performance is amazing; she develops Vivian fully, tells stories well, and brings everyone she talks about to life.

Director Hill unfortunately lets the pacing lag, particularly between scenes; after the fifth or sixth scene change, the musical intervals become irksome. Hill's blocking is also problematic; in certain scenes, particularly between George and Helen, the characters seem unanchored, with no physical reality. The set, by Roman Tatarowicz, is attractive, but may contribute to the lack of context. On the other hand, the projections, by Kevin R. Frech, work well, adding a sense of the bigger issues and concerns.

I feel a bit churlish in this review; there is good work in this show, and a great deal of talent. But the whole is less than the sum of the parts.