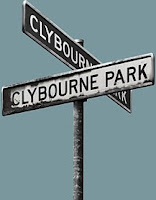 Really? Clybourne Park? This is the play that won the Pulitzer? That has a good chance at the Tony? That is receiving raves? Really?

Let's take the depiction of the deaf character Betsy to represent the whole play. Betsy is used for all of the usual cheap laughs. People yell and enunciate at her. She misses exactly what author Bruce Norris needs her to miss to set up predictable laugh lines; she is a comic device rather than a character. At one point Betsy's husband is upset that someone has used a curse word in front of her. The other person says, "but she's deaf," and then says "fuck you" to her. Not understanding, she smiles and gives a little wave. And the audience roars.

But it's already been established that she is good at lip-reading. And there are few phrases as easy to lip-read as "fuck you" as anyone who watches sports can tell you. It's a completely cheap joke, feeble, untrue to the character, and lame. And, like I said, it's an apt synecdoche for the whole play. (But the audience did roar.)

The very premise of the first act is unconvincing. It's 1959, and Russ and Bev are unaware that they have sold their house to an African-American family (we know that they are the Younger family from Raisin in the Sun, though it could be any African-American family). Their racist neighbor Karl begs them to stop the sale.  Russ and Bev's African-American maid and her husband are pulled into the fray (based on the dreadful these-people-are-staying-in-a-conversation-they-would-have-left-long-ago trope). There ensues a series of exchanges breath-taking in their lack of subtlety and nuance. The racist neighbor does everything but twirl a mustache. Bev, played as a cartoon by Christina Kirk, flails around and flaps her arms (literally), and her interactions with her maid are ham-fisted in their depiction of white ignorance, entitlement, and neediness. Any ten-second piece of Caroline, or Change reveals more about the race relations of past decades, and with humor, compassion, and complexity.

The second act is less painful to sit through but also less believable. While the Act 1 is far too one-dimensional, it deals with a reality that did exist. The second act features a few characters who come across as actual human beings, but the dialogue and situations are unconvincing and heavy-handed. Norris seems to think that having people make jokes about anal sex and tampons, or call each other cunts, is enough to make a play realistic and hard-hitting (and many critics seem to agree). But without an honest examination of genuine people, Norris's writing comes across as a middle-schooler trying to act cool.

Act 2, which takes place in 2009, reverses the situation of Act 1 as whites are now buying into a black neighborhood. They want to tear down the house from Act 1 and put in its place a building out of proportion to its surroundings. The white couple, their lawyer, a black couple who live nearby, and a mediator are trying to work out a solution that pleases everyone, but they all talk over and around each other (the various characters' ability to go off on tangents is one of the few convincing aspects of the play).

The conversation eventually comes around to race, but Norris seems unwilling to address the actual issues, preferring to fall back on the boring we're-all-savages-underneath trope. Why couldn't they have actually discussed what was going on? Why couldn't the black couple say, "If you gentrify this neighborhood, the people who have lived here for decades will get priced out"? Why couldn't the white couple say, "But we have the right to live wherever we want"? Instead, they tell racist jokes and call each other names and blah, blah, blah.

Another problem is that Clybourne Park has five whites and only two blacks, particularly since the black characters are too similar from act to act: she's the one who's willing to fight, he's the one who wants to make nice. The white people get a variety of personality types--albeit mostly one-dimensional--but the black people get a much smaller palette.

I find it quite sad that Lynn Nottage's excellent play, By the Way, Meet Vera Stark, which dealt with racial issues with subtlety and genuine humor, never made it to Broadway, while this dumb and predictable play is knee deep in kudos. But I'm not surprised. Clybourne Park establishes a white "them" that we white people in the audience can feel superior to and laugh at. It gives us the opportunity to congratulate ourselves that we would never be that stupid, racist, etc. With its cheap writing, it allows us a cheap out.

Um, the characters are intentionally written and directed as cartoonish archetypes. That's why we get such a stylized depiction from each of them, particularly in the first act. Apparently, you wanted Norris to write a completely different play and evaluated what was on stage based on your intentions, not his. Judging by the critical reviews and the audience reaction when I saw it, most others enjoyed the play for what it is.

Thanks for your note.

I'm seeing it again (after catching the Playwrights Horizon performance) tonight, but I have a feeling I'll be disagreeing with you on this one.

I look forward to your review. I'd particularly be interested in hearing how it's changed, if it has.

Play hasn't changed at all, except that Shamos and company have gotten even better at their roles. I think you're taking the wrong thing away from this production (though I respect your opinion!) when you write that "Clybourne Park establishes a white "them" that we white people in the audience can feel superior to and laugh at". For me, it reminds me of how uncomfortable racism -- be it casual, overt, or even accidental -- is, and how much it messes with our ability simply to communicate with one another. I don't feel superior to anybody in the play -- and I don't think that Steve is wrong in wanting to do away with this crippling "tact" that keeps our fences up.

I actually found Steve to be the most interesting character in the show because I found his honesty refreshing and real.