Murder Ballad, which is currently running at the Union Square Theater after a critically and commercially successful stint at MTC earlier this fall, is everything everyone says it is: paper thin when it comes to plot and character, but high in energy, trendily immersive, with a catchy enough score and a small but beautiful cast of almost ridiculously sexy people. There; that's my review: it was enormous fun, like everyone says it is. Go check it out. 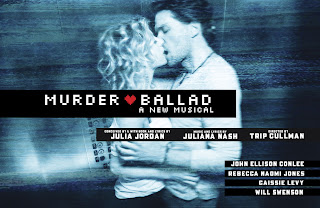 Meanwhile, know that it's rooted in a larger history, and comes out of a genre that is very old, totally lurid, and really fucking awesome. And also just as paper-thin as the plot of Murder Ballad, which is pretty up-front about the fact that audiences dig sex, blood, and lurid details, but don't necessarily give a shit about nuanced character development. The opening number makes that all clear, really, but just in case you miss what the cast is singing about because you are too distracted by their ridiculous sexiness, Murder Ballad is a musical-length murder ballad.


Never heard of a murder ballad? Sure you have. Here's one. For those of you keeping track at home, it's Child Ballad #12:

Not familiar with the original version? Dylan took all the murder out of it, and used it as inspiration for this:

There are oodles of others, some of them from the perspective of the murderer. Here's another one I like:

Poor suckers. See? You don't learn much about any of these people--except that they're all driven by lust and revenge and jealousy and the desire to make other people bleed.

Still unclear on the genre? Here are some of the most well-known representatives:


See? Loads of 'em out there. And Murder Ballad does the genre justice. Now, go run out and see it, before you get the urge to shoot a man in Reno, just to watch him die.
Posted by lizwollman at 4:44 PM