Things I Learned While Watching the 2013 Tonys 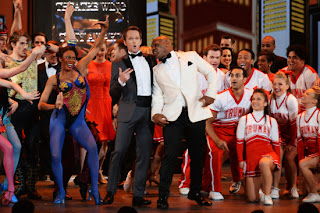 1) The Tonys are the honeybadger of awards shows. They don't give a shit, they have loose skin, and they are absolutely, completely, and totally badass.

2) Neil Patrick Harris should host every awards ceremony, ever, and if he did so, he would somehow manage to end all of the problems in the world.

3) Women are amazing, excellent creatures who work hard, gets things done, and sometimes manage to sweep every major category in the most wonderful and extraordinary of ways.

4) Little Steven has something to do with Broadway, or once did, and it involved the Rascals.

5) Little Steven digs the Rascals so much that they got a montage last night.

6) I realize I still have no fucking idea what the Rascals or Little Steven were doing there, but whatever, the song is certainly a classic. And Little Steven got to make some passing reference to The Sopranos, which is nice, I guess.

7) I really am genuinely concerned for Kenneth Posner and hope he's not too broken up about it all.

9) Motown the Musical is either awesome or absolutely atrocious, and if it's possible, maybe both at once.

12) The opening number was bionic.

13) The awards were, almost to a one, deserving, thrilling, and well-received. And bionic.

14) Phantom of the Opera is the opposite of bionic, and it needs to join Cats on the Heaviside Layer at this point. Please?

15) The Academy Awards could learn a lot from the Tonys.

Posted by lizwollman at 9:18 AM