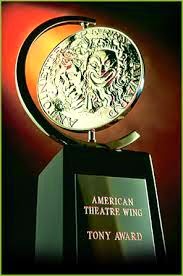 
The New York Times,  Patrick Healy provides a good rundown of what makes this particular list so weird: Unlike last year, which was essentially dominated by a tight race between Kinky Boots and Matilda for the best musical award, this year's nominations are all over the map. Smaller, lesser-known musicals like The Gentleman's Guide to Love and Murder mopped the floor with comparatively expensive, more highly anticipated musicals like If/Then, The Bridges of Madison County and Rocky. Big stars like Denzel Washington, Daniel Radcliffe, Ian McKellan, and Patrick Stewart lost out to guys who don't have household names, like Samuel Barnett and (the always brilliant) Mark Rylance. Also, at least behind the scenes, last year was a totally awesome year for women; this year, alas, not so much. And finally, apparently, theatergoers groove passionately enough on Shakespeare to (I hope) put at least a temporary end to stupid, lazy comments about how stupid and lazy Broadway audiences have become in recent years.

Healy is always good for straightforward reporting on the theater industry; others, however, have weighed in a little more emotionally about the nominees. In the The Daily News, Joe Dziemianowicz wrote an amusingly grumpy and blunt op-ed titled "What the Tony Voters Got Right and Wrong," which I think you should attempt to read aloud in a "hey, kids, get the hell off my lawn" tone of voice if you link to it.

In The Times, Charles Isherwood, who probably should have taken a long, contemplative walk followed by a nice hot soak before weighing in, instead ranted rather meanly about how the five Best Play nominations all sucked big, hairy, exceptionally boring wang, and how his all-time favorite play, The Realistic Joneses, is brilliant and made entirely of diamonds and candy and orgasms. Which, he continues, the Tony voters en masse all clearly hate and want to banish from the face of the earth--or, at least, from Broadway proper, because they are imbeciles or something.

By far the most informative analysis I've read about the nominations is over at Broadway and Me, a blog I always find compelling. The writeup about the nominations is not nearly as amusingly crabby as Isherwood's or Dziemianowicz's, but it's clear and worthy of your time, and should be read aloud in a perfectly normal voice, if you choose to read it aloud at all.

Now that I'm thinking about what others think about this year's nominations, it occurs to me that maybe the nominations don't ultimately say anything at all, except that Broadway continues to thrive, and entertain, and surprise, and matter a great deal to a lot of people, no matter what kind of year it's been, or what trends are dictating the industry and the aesthetics.

Oh--and also, that Neil Patrick Harris can do no wrong, has no enemies anywhere, and is universally loved by everyone--including, I'm guessing, Charles Isherwood.
Posted by Liz Wollman at 4:23 PM

Thanks so much for the kind shout-out and for your smart analysis as well.