I did not start reviewing until much later in 2017 for Show Showdown, but I still found it difficult to bring my list down to 10. Although, if I am being truly honest, only four of these are from Toronto. Read on for my performances to remember from 2017.

The Millennial Malcontent
Tarragon Theatre
I did not expect to enjoy this play. In fact, based on the title I was ready to skip it--yet another group saying bad, cliche things about my generation. But instead Millennial Malcontent took the tropes and structure of a Restoration drama and put it in the present day. I could tell that the older members of the theatre were uncomfortable during much of the show, but my friend and I were laughing up a storm. We could--for better or for worse--see parts of our present day reflected on stage.

Interstellar Elder
Toronto Fringe
The science fiction theme drew me in, and the amazing dance/clown performance held me for the entire hour-long performance. The sound design provided amazing narration and characterization for a pod carrying the human population in perpetual sleep until planet Earth becomes habitable again--but the physical performance by Ingrid Hansen stretched and looped time so we could experience life stuck on a space ship endlessly orbiting.


Hogtown
Hogtown Collective at Campbell House
Immersive theatre in the heart of Toronto that reflects Toronto history--and includes song and dance! I'm so glad I did not miss the 2017 remount of Hogtown. Guests go back to 1926 on the eve of the next mayoral election to follow gangsters, flappers, and a huge cast of characters through the rooms of the historic Campbell House. I found it the perfect combination of guided and free exploration and a great use of this public performance space. I can't wait to experience whatever this collective produces next.


Pixel Dust
Edinburgh Festival Fringe
I did not expect the first show I saw at the Fringe to blow me out of the water--but that is exactly what Pixel Dust did. It took the format of a black box, one woman show about a teenager finding her identity on the internet and turned it into physical, visual, and auditory poetry. This show had some of the best projections I have ever seen in live theatre.

A Hunger Artist
Edinburgh Festival Fringe
I love Kafka short stories. This adaptation floored me with its combination of puppetry, clowning, audience participation, and incredible physical storytelling. Set in a world where artists must often starve themselves–or make a performance of killing themselves–in order to fund their work, this rang really true at the Edinburgh Fringe. Go see it in NYC or Hartford in the New Year!

Baby Mama
Edinburgh Festival Fringe
I did not want to see an autobiographical one woman show about an actress giving up her baby for adoption. I'm so glad I met the actress and director at another venue and realized I needed to support them. Amazing yet subtle structuring through lighting cues made this story genuine and deeply emotional, while still feeling very conversational. In the last few moments, I definitely happy/sad cried--and so did everyone else in the venue.

Sasquatch the Opera
Edinburgh Festival Fringe
Opera, when done well, takes the absurd and turns it into distilled beauty. This hour long opera took Christian heretic meth heads, a woman on a leash, and a huge hairy beast howling at the moon and turned it into a compelling and heartbreaking story. Live music cannot be replicated. I appreciated every detail poured into this Fringe production. Silly title, but serious opera. 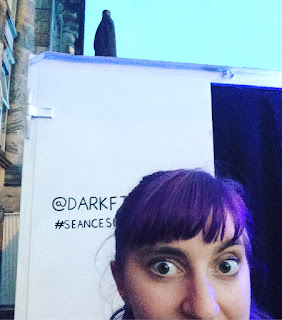 Seance
Edinburgh Festival Fringe
My absolute favorite experience of the festival, and possibly the year, only lasted 15 minutes. Seance takes 20 people into a shipping container, sets them up with binural headphones, and then locks them in pitch black dark for 15 minutes of audio terror. As a scaredy cat, I screamed even before the lights went off. But when I emerged, I found myself vibrating with the adrenaline high, but also with awe and wonder at all I had learned about myself in those few minutes of "seance" sound.

Mouthpiece
Edinburgh Festival Fringe
I left the Canada Hub theatre simultaneously kicking myself for not seeing the first Toronto production in the fall, and celebrating that I saw this powerhouse feminist physical theatre piece at just the moment when I needed it. Creator/performers Norah Sadava and Amy Nostbakken emerge from a bathtub to play two halves of a woman preparing to give the eulogy at her mother's funeral. What they speak and act said volumes about what voices and roles a woman can face. Check out the remount at Buddies in Bad Times in Toronto in April 2018!

Undercover
Tarragon Theatre
I usually hate improv but I really wanted to get picked for Undercover. Rebecca Northan and her cast create a slightly different show every night which allows one audience member to play a rookie cop solving a murder mystery. Northan's "spontaneous theatre" process simultaneously built a unique experience for the audience member chosen, and two amazing performances for the rest of us: the play's murder mystery, and the way each member of the cast worked together to construct that play before us all. This is what theatre can do that no other medium can. I might now be a partial improv convert.

Honorable Mention: Gilmore Girlprov by Hot Cousin Productions, Comedy Bar
Even before the revival, I could go once a month to Comedy Bar and re-enter Stars Hollow for another hour--but this time unraveling right in front of my eyes. This improv show uses all the tropes and characters we know and love from Gilmore Girls, plus a stand-up comic to open the show and TRIVIA with prizes at intermission, to build laughter and community. Special shout out to the women who play Jess and Dean. I am now Team Cross-Dressing; you play those two angsty heartthrobs better than Milo Ventimiglia and Jared Padalecki ever did.