The School of Doing: Lessons From Theater Master Gerald Freedman

You may have heard of director Gerald Freedman. You may not have. But you've certainly heard of his work: Freedman assistant-directed the original West Side Story and Gypsy. He directed an early version of Hair before Tom O'Horgan brought it to Broadway. He directed various revivals of West Side Story and dozens of classics. He taught at Julliard in the early 1970s and was the dean of the University of North Carolina School of Arts for many years. He devoted seemingly every waking minute of his life to theater and its relatives film and opera. He was and is deeply admired by performers such as Mandy Patinkin, Christine Baranski, Patti LuPone, Chita Rivera, Kevin Kline, and many others. 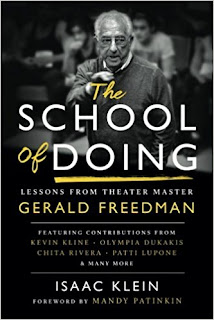 And now there is a book that's sort of by him, sort of about him, and mostly about his beliefs on the making of theater. The School of Doing: Lessons From Theater Master Gerald Freedman is an odd, cobbled-together book. Author Isaac Klein took Freedman's words (gathered from personal interviews and various publications) and quotes from a who's-who of theater professionals and added his own commentary to create a book that is choppy, repetitious, uneven, and frequently annoying yet ultimately worthwhile reading for actors, directors, playwrights, and audience members interested in how the sausage is made.


Freedman is quoted at length about how to read a play, how to find its spine and actions, how acting = doing, and the priceless benefits of collaboration. Much of what he has to say is fascinating; all of it is smart. I particularly enjoyed the section where he compares directing musicals to directing Shakespeare:


My experience with musicals showed me how close Shakespeare was to musicals in form, in energy, and in the desire to communicate. He also wrote for a popular audience. Both the musical and Shakespeare had been created as popular art--public entertainment--and make no mistake, Shakespeare was show business...

The soliloquy in Shakespeare, "To be, or not to be, that is the question"--direct address to an audience, sharing a character's inner feelings with the audience--was not that different from Professor Higgins declaring "I've grown accustomed to her face. She almost makes the day begin."

He then talks about how directing musicals informs directing Shakespeare, and vice versa.

Considerably less interesting are the chapters on design, many of which are little more than leftover quotes from various designers. While these chapters do have some interesting things to say, they don't say enough.

All in all, Klein has edited into existence a chimera of a book, which is too bad. An actual written book, with careful flow, filled-in holes, and more organic use of quotes would be so much better. But, despite its faults, The School of Doing has a lot to say.