When I wrote my first review of  the fabulous APAC production of Follies, I was short on details. Then someone on the often-infuriating but also often-invaluable All That Chat asked for more details (shout out to lordofspeech), and I wrote a long answer to his post. Here it is, with a bit of polishing and updating. 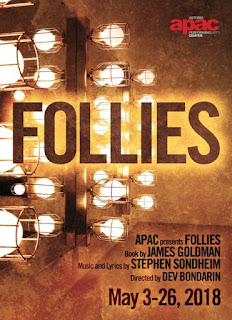 I loved Tina Stafford. I thought she nailed Sally's complexity: yearning, angry, disappointed, hopeful, and sadly aware that she's at least a little silly. She wears her heart on her sleeve even though she knows it isn't a great idea. Her "In Buddy's Eyes" and "Losing My Mind" were both excellent.

Greg Horton was excellent as Buddy in everything except his dance for "The Right Girl." He and the choreography just didn't mesh, though it worked better the second time I saw the show.

Bruce Sabath was a solid if unexciting Ben.

After my first time at this Follies, I wanted more from Marcie Henderson as Phyllis. Her version of hauteur came out slightly robotic, and her line readings were a tad mechanical. The second time, I got what I wanted. Henderson has grown into the role really well, and her voice was much fuller the second time around. "Could I Leave You" and "The Story of Lucy and Jessie" were both strong at my first visit; they were even better at the second.

LaDonna Burns was fabulous as Stella Deems; her "Mirror Number" was funny and moving and brought down the house.

Sara Brians' choreography was a hair derivative but great fun. There are some truly exciting dance numbers in this show.

I thought Carolyn Seiff as Salonge and Christine Donelly as Hattie were both quite good.

Victoria Bundonis did well with "I'm Still Here." Very good story-telling, very nice build up. (She sang it to Weissman, by the way. It seems to always be staged somewhat differently.)

Susan Cohen DeStefano had a beautiful dignity as Heidi, and I loved her singing of "One Last Kiss." I thought young Heidi (Denali Bennett) had a very nice voice, though not the voice I would choose for that song.

The ensemble was composed of extremely talented and good-looking young people.

Some of the costumes weren't fabulous. But keeping in mind the probably super-small budget, many of the costumes were better than might be expected. Designer Jennifer Jacob showed great creativity and flair. I really liked Buddy's outfit in "Buddy's Blues" and Phyllis’s dress in her Follies number.

I loved the set (designed by Ann Beyersdorfer). There's ripped drapery around the auditorium. The staircase is short but works. The biggest asset set is the Follies sign. The letters are quite large and light up when appropriate. One letter has fallen. And in a very smart decision by the designer and/or director, the O is used as an entrance/exit, allowing fuller use of the stage. There are also lights around the proscenium. (Lighting by Annie Wiegand.)

What was most moving? It was Follies, and it hit the emotional highs and lows quite nicely. I frequently had tears in my eyes and one friend reported tears streaming down her face. And while the band was only four people, they nailed all the themes that Follies, IMO, must have. (Musical director, James Higgins.) They had reeds, trumpet, and keyboard/synthesizer. The canned music did not sound canned, and the live music was excellent. (Sound design by Caroline Eng.)

Oh, and one other thing: really good enunciation all around. Even though I know the show by heart at this point, I still appreciate hearing the lyrics.

Will I see Follies one more time? I just might!