Historians on Hamilton: How a Blockbuster Musical is Restaging America's Past (book review)

After all that's been written about Hamilton, one might think that there's nothing left to say. Turns out there's at least 400 pages' worth, as shown in Historians on Hamilton: How a Blockbuster Musical is Restaging America's Past (edited by Renee C. Romano and Claire Bond Potter; see table of contents, below). The book should be of interest to people who love theatre, more interest to people who love history, and a treat for those (myself included) who love both. (For the record, three of the people who contributed to Historians on Hamilton specialize in theatre, rather than history. One of them, Elizabeth Wollman, writes for this blog.) 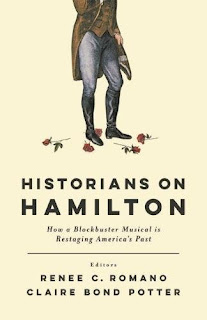 Some of the questions discussed in Historians on Hamilton: Who was Alexander Hamilton? How true is Lin-Manuel Miranda's Hamilton to the real man? How much historical accuracy should we expect from art? Is Hamilton doing good work by getting young people engaged with history? Or is it doing bad work by getting young people engaged with inaccurate history? How has Hamilton managed to have a significant effect on thousands of people who will likely never see the show? How has Hamilton managed to win over people on both the left and the right? What is the role of race in Hamilton? Does it matter that none of the characters are actual people of color? Does Hamilton represent a revolution or the next step in theatre's evolution?

These questions are discussed at length, with some surprising disagreements.
The writing is compelling and thought-provoking. The book is what you'd want it to be, based on the title.

This book further convinced me what I already believed: Miranda's Hamilton is definitely not history's. In fact, he was elitist and anti-democracy. And he was arguably not an immigrant! I hope that students who become engaged with American history through Hamilton take the time to learn more about what actually happened. As Catherine Allgor writes, "Can we say there was an American Revolution if nothing changed for half the white population, in addition to all African Americans and Native Americans?"

I also agree that Hamilton is evolutionary rather than revolutionary. Miranda's foundation in musicals is deep, and Hamilton evolves from that, rather than exploding it. And there are ways in which Hamilton is actually kind of backward. One of which, to my surprise, is the treatment of race.

While casting people of color in the roles of founding fathers seems to attack race straight on, it also is a way of bypassing how many founders were slaveholders. And by exaggerating Hamilton's abolitionist beliefs and actions, Miranda gives him more glory than he deserves. Also, Miranda's decision not to have any characters who were actual people of color is another way to skirt the whole slavery question. As Lyra D. Monteiro points out, "This has never been a white nation." She adds, "...the line 'No one else was in the room where it happened' completely erases the slaves who would have been in that room serving dinner." Patricia Herrera tells a poignant story of being thrilled with and sharing her children's love of Hamilton until her ten-year-old daughter announces that she wants to dress as Angelica Schuyler for Halloween.  Herrera asks herself, "How could my beautiful brown-bodied Latina daughter want to be Angelica Schuyler, a slave owner?" The answer, of course, is that Hamilton presents Schuyler as smart and hip and beautiful (particularly in the person of the insanely talented and likable original cast member Renée Elise Goldsberry) and gives no attention to her slaves.

Historians on Hamilton is smart and interesting. It was great fun to read all the different points of view and even have some of my opinions changed. What more could you want from a book?

Table of Contents
Act I: The Script