Head Over Heels is fun, charming, and a lot more complex than it initially appears. It is, after all, no garden-variety jukebox musical, but one based on Sir Philip Sidney's late-16th-century prose work The Countess of Pembroke's Arcadia, scripted in iambic pentameter, and used as a jumping-off point to celebrate love in all its guises. Refreshingly queer and endearingly topical, the musical features a plot that is gleefully convoluted without being a chore to follow. 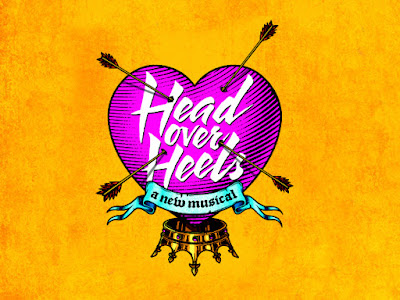 In a nutshell: The citizens of Arcadia are proud of their beat, which presumably gets them on their feet, allows them to walk down the street, lets the kids be cool after school and...well, you get the drill. But lo, King Basilius (Jeremy Kushnier) has become pretty lousy at his job, and has also been a less-than-inspiring husband to Queen Gynecia (Rachel York, bionic at this point). Their elder daughter, the hilariously vain Pamela (a stellar Bonnie Milligan) refuses to settle down despite countless suitors who vie for her hand. Meanwhile, their younger daughter, Philoclea (Alexandra Socha), is madly in love with the lowly shepherd Musidorus (Andrew Durand). The Oracle of Delphi, here in the guise of a transgender snake named Pythio (Peppermint) appears and lays some pretty dark prophecies on the kingdom and its people, which basically boil down to the collective loss of beat--and, hence, certain death.

Much wackiness ensues, as does some Shakespearean-style cross-dressing, deception, mistaken identity, self-realization, accidental sex with unexpected partners, plenty of 80s-inspired dance numbers (by Spencer Liff), the very funny trashing of a bedroom, a lot of wordplay, and many Go-Gos (and solo Belinda Carlisle) songs. The show is colorful, upbeat, and not out to punish anyone: it all works out well in the end, everyone falls in love and lives happily ever after, and (spoiler alert!) the kingdom thrives anew with a ascension of a female leader.

Head Over Heels has been struggling to connect with audiences, which is curious; perhaps the Shakespeare-style dialogue is a deterrent (it shouldn't be), or perhaps not everyone is totally comfortable with how very queer the show is (I wish everyone were). But if you're on the fence, get thee hither: a warm, bubbly show that promises total acceptance, happy endings for every one of its lovelorn characters, and a heaping plate of cultural wish-fulfillment just can't be....um....beat.