Playing to the Gods (Book Review)

In the acknowledgements at the end of Playing to the Gods: Sarah Bernhardt, Eleonora Duse, and the Rivalry That Changed Acting Forever, author Peter Rader explains that he (with a coauthor) had originally wrote about this rivalry as a screenplay, but "Subsequently, to deepen the narrative, I decided to explore the subject in book form." Just one problem: the deepened narrative he has provided is based on little but his imagination. Yes, the book has notes, but they focus only on quotations from newspapers or other books. When it comes to Rader's depiction of scenes, dialogue, and emotions, there are no notes at all. 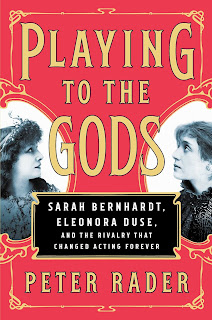 For example, from page 107: "They will adore you, insisted Tanczer; the actress remained unconvinced." No notes. Or page 151, "Sarah was outraged at how easily critics bought into Eleonora's 'saint' mystique." No notes.  Page 214: "It was high time, grumbled Sarah, upon learning she was to receive France's highest accolade." No notes.

This may seem like nitpicking, since each little example doesn't matter that much. But the book is full of them, including entire scenes; they go from the first sentence ("Cesar Ritz checked his pocket watch as the lavish carriage rolled into the roundabout") to the last paragraph ("Both actresses would have agreed with Stanislavski's greatest instructions"). They morph the book from biography to historical novel.

Rader is also inconsistent. For example, in the beginning of the book he makes much of the fact that Eleonora Duse and her family were traveling performers who lived from town to town with no guarantee of a roof over their heads. Then, he writes that Eleonora's mother "invited [a] distraught woman into the cottage where they lived." Where did this cottage come from? Were the Duses doing better? How was the cottage paid for? Again, while this one example is not the end of the world, there are so many that the book becomes completely unreliable.

To be honest, if I was not reviewing this book, I wouldn't have finished it. (Also to be honest, it has gotten some good reviews, including its Kirkus review.) But it did accomplish one thing for me: it made me want to read more reliable books about these two incredible actresses.