Forbidden Broadway: The Next Generation

Once upon a time, Broadway was full of larger-than-life stars (often women) easily identified by their distinctive voices and mannerisms. Gwen Verdon. Carol Channing. Ethel Merman. Elaine Stritch. Patti Lupone. Mandy Patinkin. Bernadette Peters. They were the stuff of impersonators' and satirists' dreams. In addition, Broadway was more significant to US culture than it is now. 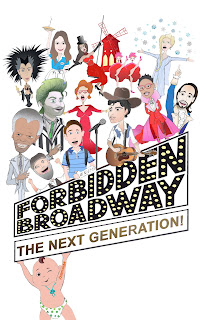 Today's stars are often as talented in their own ways, or even more so, but not larger than life. Kelli O'Hara. Sutton Foster. Ben Platt. Santino Fontana. Katrina Lenk. And they don't have the level of fame the old-timers do/did.

For Gerard Alessandrini, creator of the hilarious Forbidden Broadway series, these changes must have presented a major challenge. In Forbidden Broadway: The Next Generation, Alessandrini meets the challenge by taking on Broadway as a living idea, rooted in old ways and growing toward new ones. Yes, he and his excellent cast provide us with fabulous over-the-top versions of Bob Fosse, Gwen Verdon, Bette Midler, Jennifer Holliday, and Bernadette Peters, but they also take on the musicalization of every damn movie ever made, juke box musicals, Irish drama, inclusivity, and "woke-ness." This Forbidden Broadway is, as always, hysterically funny, but it's also surprisingly moving. Alessandrini adores the theatre, and his love is always present, even at his skewering best.


The star of Forbidden Broadway: The Next Generation is Jenny Lee Stern. Alessandrini smartly makes sure that all the roles are identified by name ("I'm Amber Gray," "I'm André De Shields"), but this safety net is not needed when Stern is on stage. I particularly loved her Gwen Verdon and Judy Garland, but she was also great playing an old lady in a coma.


I laughed for about 78 minutes of Forbidden Broadway: The Next Generation's 80-minute run time. The other two minutes, I actually got a tad ferklempt. Gerard Alessandrini is a gift to the New York stage, and I am so glad to welcome back my old friend Forbidden Broadway.

Really liked that lead in paragraph