What is a play? There are many definitions, of which this one (from the Merriam-Webster website) is a representative example:

This is clearly a simple and perhaps simplistic definition; it ignores the many ways that great playwrights have broken the boundaries of theatre. But it's also a good starting place. 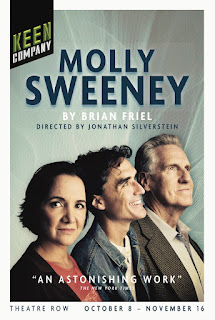 I was pondering this definition while watching the Keen Company's revival of Brian Friel's 1994 two-act play, Molly Sweeney. The story of a blind woman who undergoes surgery to partially restore her sight, it consists of alternating monologues by Molly, her husband Frank, and her surgeon Mr. Rice. As the play went on, I just kept wishing they would talk to each other!

The device of alternating monologues can provide conflict by having the characters give differing accounts of what happens; however, Molly, Frank, and Mr. Rice are largely in agreement. It can add dimensions to characters by allowing us to see them through varied points of view; again, there is little disagreement among the three characters. Monologues could also, theoretically, provide suspense by carefully doling out information, but Molly Sweeney telegraphs its aims, meaning, and ending early on.

So we're left with the language and the performances. The language is often lovely, as Friel's language generally is, but there's just too damned much of it. On and on the characters drone, well past the point of having anything to add.

And, in the Keen Company's production, directed by Jonathan Silverstein, the performances are disappointing. Molly (Pamela Sabaugh), Frank (Tommy Schrider), and Mr. Rice (Paul O’Brien) never bloom into characters. In addition, the actors fail to vivify the anecdotes they tell and the people they describe.

Molly Sweeney is not one of Friel's best works but I'm sure it has more to offer than evidenced by this sadly flat production.