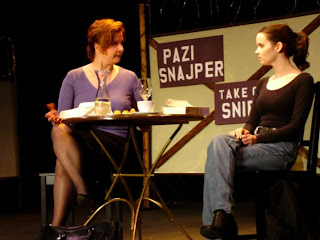 This absorbing new play at the Fringe Festival by Steven Fechter (The Woodsman) caught me by surprise: after the first scene I was sure I knew where it was going (political intrigue) and then it went somewhere else (sexual warfare) and then somewhere else again. That's not to say that the 95 minute one-act is aimless; to the contrary, it's sharp and lean and purposeful as the scenes play out in reverse chronological order. (I feel like a spoilsport to reveal the play's structure, but it's the most benign thing I can give away to indicate the drama's rigor and intelligence.) Set in an unnamed country (Yugoslavia?) during and after a brutal civil war in which many civilian women were raped and murdered, the play begins with what seems like the chance meeting between two women: an American who is entangled extramaritally with a prosecutor of war crimes, and a young student who fears that her fiance, a solider, is dead. The violence that we see on stage is mostly of the interpersonal kind, including an extended nude scene between the older couple that is harrowing in its frank depiction of warm intimacy turning cruel. Apart from the complaint that one of the actors is not up to the same level as the rest of the ensemble, this is a highly recommended production of a striking new play that is sure to linger in the memory of anyone who sees it. Most definitely a potential best-of-Fringe pick.
Posted by Patrick Lee at 10:00 PM

The plot is so manufactured in order to fit a moving target of playright's current interest. Civil wars are so rich on human pain, that you do not need any weird plot gimmicks to keep suspense.

I found that the "gimmick" revealed itself as purposeful once I saw the whole arc of the play: we end up at the familial root where women are culturally treated as chattle. The civil war is the backdrop, but I don't think it's what the play's about.