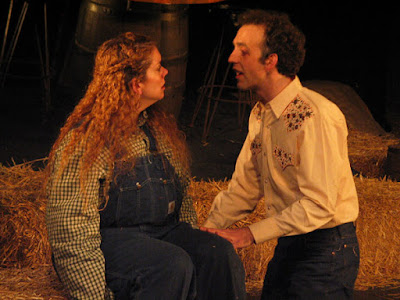 Photo/Jonathan Slaff
In America, everybody's lonely. August Schulenburg's honest satire, Riding the Bull, takes two Southern-grown heroes--an awkward rodeo clown and the rightly named "Fat" Lyza--and looks to connect to, rather than demean, the world around us. In rapid succession, Schulenburg gives us glimpses of loneliness being tackled by focused intensity (on, say, milking a cow), constant sex (otherwise known as "temptation"), money (the American solution), faith, and finally, love itself. That this is all done without bucking us from the saddle is due largely to the likability of the cast and Kelly O'Donnell's intelligent direction.