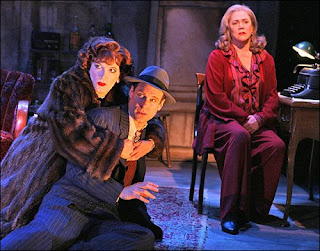 Kathleen Turner has rarely seemed above sending herself up. Her casting opposite Charles Busch in his new play would seem to promise a lip-smacking treat - a match made in camp heaven between a drag icon who adores Hollywood screen women and a game, one-time real-life Hollywood siren. One of The Third Story's many disappointments is that it confines Turner almost entirely to a (relatively straight) framing story where her grand theatricality is a liability rather than an asset: her throaty voice and broad delivery are at odds with what's needed to put over her material. The play is almost entirely divided between scenes where Turner plays a screenwriter collaborating on a script with her son (Jonathan Walker), and scenes from the movie the two are writing, circa 1949, which often feature Busch in lady mob boss drag. The Busch scenes are more lively than the Turner ones, and the supporting cast has the right arched eyebrow style for them, but the play's structure forbids comic momentum.
Posted by Patrick Lee at 7:45 PM