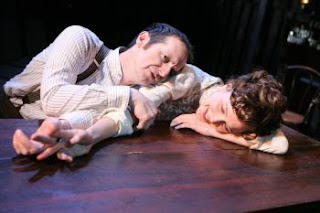 It's no secret that good productions of Chekhov are hard to come by in New York, while bad ones are a dime a dozen. The last decade has seen everything from Derek Jacobi crashing and burning in a Roundabout-helmed Uncle Vanya to last winter's terminally overpraised, melodramatic incarnation of The Seagull. Austin Pendleton's new production of the former play, which recently opened at Classic Stage Company in the East Village, falls somewhere between the two poles; the production itself is attractive and fluid, but suffers from crucial casting errors in several key roles. Both Denis O'Hare and Maggie Gyllenhaal, as Vanya and Yelena Andreevna respectively, are far too contemporary for such a traditional staging; he runs around dispatching his trademark hysterics, while she brings her hipster inflections to her bored character's languid dialogue. Peter Sarsgaard, the weakest link of the aforementioned Seagull, fares slightly better here as the frustrated Dr. Astrov, but I believed neither his passion for Yelena nor his neutrality towards the plain Sonya (Mamie Gummer, in the first winning performance I've seen her deliver). In the end, it's a shame that Pendleton (a former CSC Vanya himself, in the late eighties) has to waste a generally winning mise-en-scene on such a disparate and defective group of actors.
Posted by Cameron Kelsall at 12:01 PM