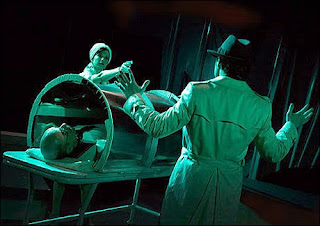 City of Angels, a delightful musical by Cy Coleman (the enjoyable music), David Zippel (the mixed-quality lyrics), and Larry Gelbart (the hysterical book), combines the real world (the story of a novelist struggling to write a screenplay) and the reel world (the screenplay come to life). With multiple sets, a large cast, frequent costume changes, and the need for over-the-top performances that don't go too far over the top, City of Angels is an ambitious choice for an Off-Off-Broadway theatre company. However, the folks at the Gallery Players, located in Brooklyn, are more than up to the challenge. The five-piece band is excellent, and the cast handles the humor, singing, and costume changes with aplomb. Particularly outstanding were Blair Alexis Brown, playing secretaries in both worlds; Danny Rothman as the fictional private eye; and John Weigand, who knows how to make the most out of performing in an iron lung. The weaknesses in the Gallery Players' production can mostly, I suspect, be chalked up to lack of funds. The scene changes take too long, and the differentiation between the real and reel worlds is accomplished with a lighting scheme that makes the actors look a little green around the gills (in the Broadway version, the real world was in color and the reel world--scenery, costumes--in black and white). The voiceovers could also be a little clearer. But the strengths of this production far outweigh the weaknesses, and it's not too late for you to see it (it runs through May 23rd).
Posted by Wendy Caster at 12:39 PM