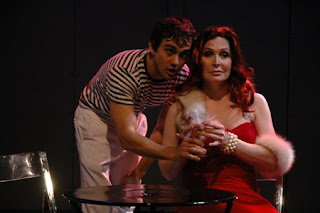 Talking Band's latest experimental piece, currently at 3LD Art & Technology Center, is that rare example of multimedia theatre in which video projections are used judiciously, presented artfully, and kept in disciplined service of the story. Set on a cruise ship, with just enough visual theming to qualify as environmental but not so much as to become kitsch, the unpretentious, often whimsical collage-like play drifts from vignette to vignette as it tracks an increasingly strange trip at sea. We meet specific, vivid characters, and we learn some backstories, but there's an engaging ambiguity to the piece as it builds: its meaning is more meant to be intuited than explicitly spelled out by narrative. Gradually, the show's mix of music (by Ellen Maddow), scenes (writer-director Paul Zimet), movement pieces (Tigger!), and multimedia (Simon Tarr) combine to evoke the feeling of a gentle, waking dream. This has to be one of the most theatrically sound and memorable pieces I have yet to see at 3LD.
Posted by Patrick Lee at 12:35 AM