If you never had the amazing experience of seeing Colleen Dewhurst perform live, you can get a taste of how wonderful she was through the magic of technology. In 1959, John Steinbeck's Burning Bright was presented as a TV Play of the Week, and the Broadway Theatre Archives released it as a DVD in 2003. The play is overwritten and mediocre. The tape is black-and-white and raspy and very low tech. None of that matters: this is a gift. 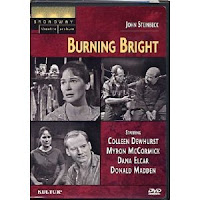 In Burning Bright, Dewhurst plays Mordeen, a woman married to, and very much in love with, an older man who is unable to father children. She swears again and again that she would do anything to make him happy, and she's not kidding.

Steinbeck wrote the play in a hyper-lyricism that is short on contractions and has even less to do with how real people talk; his characters would be comfortable in an Odets play. Myron McCormick (as Mordeen's husband Joe Saul), Dana Elcar (as Joe Saul's best friend), and Donald Madden (as the young stud who is, of course, trouble) sound like they are reciting poetry and not that well. Dewhurst, on the other hand, manages to make Steinbeck's turgid and obvious dialogue sound real and meaningful and emotional and true. She plays an actual human with actual human desires and fears, despite the mediocre writing. The play isn't particularly well-directed by Curt Conway, but he is smart enough to focus on Dewhurst's face in long takes while other people talk to/at her. These moments are gems in which her brilliance shines through.

If, like me, you only know Dewhurst's later work, it is a treat to see her at age 35, beautiful, sexy, and, as always, powerful. With her voice not yet deepened by cigarettes, and her face unlined, she is a different Dewhurst than she was in the 1970s and later. She is more accessibly vulnerable, a little less of a force of nature. But she is Dewhurst.

(I will never take technology for granted; it still feels miraculous to press a button and have perhaps my favorite actress appear in my living room 54 years after her performance was taped--and 21 years after her much-too-early death).

(DVD from Netflix)
Posted by Wendy Caster at 8:40 PM

"I will never take technology for granted; it still feels miraculous to press a button and have perhaps my favorite actress appear in my living room"

I feel the same way about Margaret Leighton. Whether great (An Ideal Husband) or too over the top (The Vortex), it's such a treat to see her in a taped play.