Disgraced was the play of the moment when it won the Pulitzer Prize in 2013. This month it returned to Toronto for its second run by The Hope and Hell Theatre Co. and David Mirvish at the Panasonic Theatre.

Though the play centers around a dinner party gone wrong, it mainly follows Amir (Raoul Bhaneja). He has done everything to fit in to the upper classes of white American society--switch from public defense law to corporate mergers and acquisitions, marry a white American woman (Emily, played by Birgitte Solem), and denounce his Islamic upbringing at every chance. When his efforts to reject the Islamic faith and hide this part of his identity backfire, his wife and the attendees of their celebratory dinner party get to watch him unravel.

The show is well-produced with a spotless set representing Amir and Emily's high-end loft. But unfortunately there's not much else I can say that I liked about the production. I will admit I was biased against Ayad Akhtar's play from the beginning. I read the script four years ago in an issue of American Theatre. It didn't impress me then. When a friend offered me a ticket last week, I decided to give it a second chance. After all, everyone here in Toronto was raving about it and this was a repeat, almost sold-out second engagement. 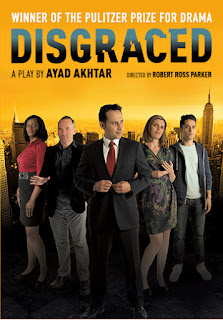 Unfortunately seeing it on stage, at least in this production, still did not win me over.

I did appreciate the play's commentary about white men being the next terrorists. It hit even harder now in the years after Sandy Hook, Orlando, Vegas and countless other shootings by mostly white men on American soil. I do also agree that cultural appropriation--a theme the play explores through the Islamic influences in Emily's art--is tricky and worth exploring. How do we honor the voices of minorities and their contributions to culture without appropriating or fetishizing their traditions? Then again, it is difficult to see Emily's abandonment of Islamic influences as an answer to this question, or because her husband uses his religious upbringing as an excuse for beating her.
My favorite character in the whole play, Jory (played by Karen Glave) had some fantastic one liners. In a room of different minorities all claiming "who has it worse?" Glave put everyone in their place without taking over the story. Besides the shock and awe of discovering an affair between her husband, Whitney art curator Isaac (Alex Poch-Goldin), and Emily, Jory's job still puts her in the position of the most power at the end of the play--a note that I did not miss. 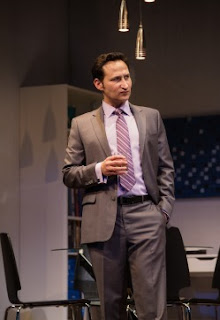 But in the end, Disgraced is another traditional dinner party, two act, ninety-minute play. The only difference is a man of Arab descent at the center of the action instead of a middle-aged white man. Electrifying acting and directing could have punched up the commentary and breathed more into the interpersonal relationships, but as my acting friend especially noted, that didn't happen either. Without the chemistry of a happily married couple, the love between blood relatives, or the playful trust of friendship, it did seem like the overarching institutions of religion and class were controlling the characters as they fought around the dinner table. To me, that's not a compelling story to watch. It's excuses.

To be fair, the play seemed like it landed well with the rest of the audience. The struggle of a privileged man of color in corporate culture did not speak to me, but perhaps it did to many older patrons who have worked in that world. Seeing the story of an Arab man might illuminate something new for them.

But for me, I think theatre can do so much more.

Free ticket as plus one with a friend, row Q.
Posted by Maggie at 10:26 PM