There are still some seats left for Nellie McKay: The Big Molinsky--Considering Joan Rivers at Joe's Pub on November 17 at 11:30. They're only $15, with a $12 cover (the fries are delish). Here's the link. If you like her, go. If you've never heard of her, go. 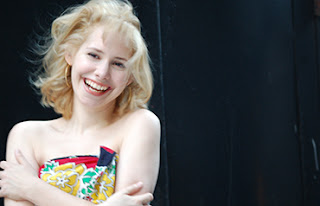 So now I suppose I should tell you who Nellie McKay is and describe the performance, but it's like trying to tell a stranger about rock and roll. When my nephew asked what kind of singer she was, all I could come up with is, "She's Nellie McKay." It's the only correct answer.

But, hey, I'll give it a try. Nellie McKay is sweet, lovely, talented, and funny, with an edge. She is innocent and experienced. She sings every sort of music, from 30's musicals to the Beatles and beyond, along with her own songs. (Her latest CD is My Weekly Reader. I highly recommend it. Song list here. The actual CD has two bonus songs.) She plays piano, ukulele, bells, clarinet, congas, cymbals, harmonica, keyboards, maracas, marimbas, organ, and tambourine.

In The Big Molinsky--Considering Joan Rivers, which is a solo show, McKay plays Joan Rivers, as well as many people in Rivers' life and people in movies Rivers watches (McKay does a great Dietrich). She inserts all sorts of songs, which she sings wonderfully. She also manages to include a lot of political commentary, as asides, which somehow fit right in and are incredibly funny while also pretty devastating. She accompanies herself on piano and uke. She is a little strange and quite talented.

During a McKay show, I tend to spend a fair amount of time thinking, "What is she doing?" and "How did she think of that?" I also laugh, a lot. And I adore her singing.

Anyway, I give up. I don't have the chops to describe the indescribable. Here's a link to some of her own work and a song from the 1920s. Check it out. And then go catch her at Joe's Pub. Really.

Wendy Caster
(paid for the ticket; sat the equivalent of 4th row, I guess?)
Posted by Wendy Caster at 6:42 PM