"Meteor Shower" by Steve Martin is perfectly cast and great fun, but it's not much of a play. The nonlinear plot makes little sense, the characters aren't compelling - except in their quirks, which are fascinating to watch: Laura's (Laura Benati) overt sexuality, Gerald's (Keegan-Michael Key of "Key and Peele") germaphobia and Corky (Amy Schumer of "Inside Amy Schumer") and Norm's (Jeremy Shamos) over-the-top marriage therapy relationship (where every slight ends with psycho-babble like, "I understand you probably didn't know you hurt me. I'm asking you to be more careful with my feelings.") "Meteor Shower," at the Booth Theater, is like a really good Saturday Night Live skit - one that meanders on longer than it should (even at 80 minutes) but, at least, it keeps you laughing. The surrealistic satire also played in California and Connecticut last year. 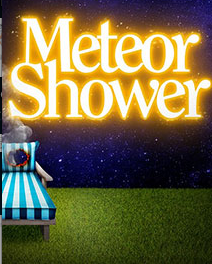 The thin storyline involves an evening of meteor watching between two couples at Norm and Corky's modern Ojai, California, home -- Beowulf Boritt designs a living room worthy of Architectural Digest. Several versions of the evening are presented, with each alternate reality leading closer to a conclusion -- although not necessarily an understanding of what exactly the resolution is ... something along the lines of "If you don't deal with your subconscious, it deals with you" as Martin dissects marriage -- with the two couples representing distinct aspects of Corky and Norm's personality. But Edward Albee's "Who's Afraid of Virginia Woolf," it is not.

There's a lot to enjoy, though. Schumer's deft skill in delivering crazy lines about "exploding head syndrome" and her cannibalistic past. Key's physical prowess - his expressive face, stance and body movement, which conveys more than Martin's play reveals. Tony Award-winner Benati's obvious delight sparring with her co-stars as she seduces everyone. Shamos' powerhouse performance of an everyman lost in absurdity -- not every actor can pull off a meteor wound with such casual aplomb. There is also Jerry Zaks' able direction, which you can see in the enormous black sky where the brilliant lights of the meteors burst (lighting design by Natasha Katz) and the production's pause that showcases it or the lovely flexibility of how the set is used, flipping easily from the home's interior to its backyard. Plus, no one does one liners better than Steve Martin: on why Corky's "exploding head syndrome" is not curable - "it's not funded." Such witticisms are aplenty in "Meteor Shower."

Biggest kudos here go to Caparelliotis Casting. Without this star-studded array of talent this show would languish. The cast makes "Meteor Shower" work ... at least well enough for a few laughs.

Posted by Sandra Mardenfeld at 12:26 AM