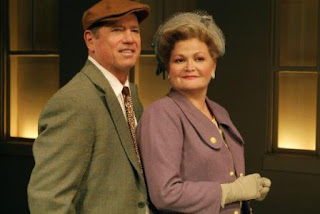 Small, somber, and unsentimental, A Catered Affair is a chamber musicalization of a 1950's era kitchen sink drama with songs so artfully scaled to the downbeat mood of the story that they play more like dialogue than musical numbers. The recitative-heavy score (by John Bucchino) is likely to frustrate theatregoers who expect musicals to deliver bombast but I found it disciplined, accomplished and finally enthralling: the music has a plainness which expresses the restrained emotions of the hard-working tenement folk in the story, never betraying them to sentimentality. Bookwriter Harvey Fierstein has erred a bit in expanding the minor role of the, ahem, bachelor uncle - the character does provide some needed levity but brings a too-contemporary "what makes a family?" sensibility that is besides the point. Despite this, the intimate "drama with music", in which a daughter's wedding announcement compels her mother to measure her own marriage against what she had hoped it would be, has a cumulative emotional power thanks to its humanity and integrity (read: trust in the material) and is further distinguished by exceptional performances. Leslie Kriter, whose vivid expressiveness usually makes her stand out from any crowd on a stage, does a fully credible turn as the Plain Jane daughter who is accustomed to being overlooked and neglected. Tom Wopat is remarkable as her long-suffering father, giving a performance that is a study in artful economy and control. But most spectacular, in the show's central role of the bride-to-be's mother, is Faith Prince's astonishing, finely nuanced performance. It isn't only that it's an astoundingly subtle and detailed performance when judged against the other ones I've seen her give, it's that it's one of the most subtle and detailed performances I have ever seen *anyone* give in a musical. Once I picked my jaw off the floor I started imagining what other roles Faith Prince could take on....in dramatic plays.
Posted by Patrick Lee at 8:39 PM