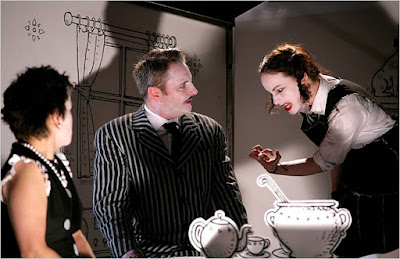 Photo/Eamonn McGoldrick
I laughed. I cried. I mostly laughed. Crafting a poetic rhythm out of repetition (think Seuss meets Churchill), Torben Betts's brute-force allegory, The Unconquered, is one of the most distinct and comically unsettling shows I've seen this season. It's far from subtle (imagine Edward Gorey making a life-sized pop-up book), but is all the more powerful by being completely, brutally true to form: a play following in the footsteps of many "righteous" nations before it. I'm probably reading too far into it, but given that Girl (the marvelous Nicola Harrison) becomes a symbol of her country's suffering when a Soldier (a creepily childish Neal Barry) rapes her, it's hard not to hear something beautifully vulgar in her cries to "Get out of my country!" Then again, you could just take it literally, too, and still leave the theater thinking this was one of the best things you'd seen all year, playing to the same crowds as last year's The Receipt and correcting all the grim missteps made by Between the Devil and the Deep Blue Sea.