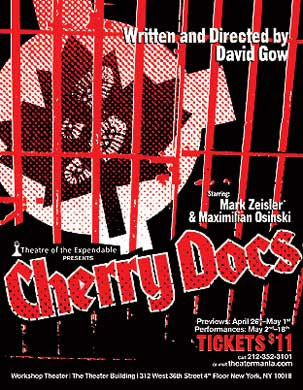 I wish that I could believe Mark Zeisler, who plays Danny, a liberal Jewish lawyer appointed to defend Mike, a Neo-Nazi on trial for an act of violence that led to a man's death. The plot, you have to admit, is hard enough to accept. I want to believe, so that I can get behind the sort of moment when Danny, holding his anger in check, refuses to punch Mike (who welcomes the violence, the language he understands best): "If I start, I'm afraid I won't be able to stop." Mike nods and gets really close to Danny: "Now you know how I feel." But because Mr. Zeisler doesn't seem genuine about any of this, we never know how he feels. Luckily, I'd recommend Cherry Docs anyway, solely on the commanding performance from Maximilian Osinski (Pablo Schrieber, look out!): I dare you not to shed a tear at his redemptive journey, going from smug and manipulative to conflicted and worried, and then from forceful denial to apologetic grief. As for David Gow's script and direction -- too much seems forced, especially the tidy final ten minutes; he would do well to listen to his characters.