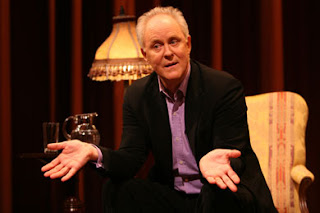 The first half of John Lithgow's ninety minute solo show is a warm and nostalgic pleasantry in which the actor mostly recalls the power of storytelling in his childhood home, paying tribute to his father (who put on Shakespeare plays) and grandmother (who read from books). It's an amiable prelude to the show's second half, the altogether delightful main attraction in which Lithgow reads (or, more accurately, enacts) P.G. Wodehouse's short story "Uncle Fred Flits By" with artful comic timing and delivery. Lithgow's skills are obvious and plentiful as he delineates the story's handful of characters but the show isn't aimed to put us in awe of his acting so much as it's aimed to remind us of the life that can spring from the printed page and of the simple joys of storytelling. It may be the most humble and generous one-man show I have ever seen.
Posted by Patrick Lee at 12:27 AM