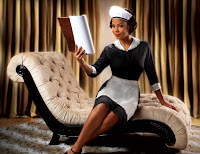 If you wanted to explain the concept of "range," you could do worse than to compare Lynn Nottage's current comedy, By the Way, Meet Vera Stark, to her recent devastating drama, Ruined. Few playwrights, if any, can write so effectively, so honestly, and so beautifully at both ends of the theatre spectrum. Certainly not O'Neill or Miller, both of whom veered toward the ponderous. Not Williams (though he considered Streetcar funny). Albee has played with humor, but has written no flat-out comedies. Ditto Kushner. Only Michael Frayn comes to mind, with his Noises Off and Copenhagen, but while that's quite a range, it still isn't as impressive as the distance from Vera Stark to Ruined. (Of course, there is that Shakespeare guy.)

It's the early 1930s, and Vera Stark (the amazing and beautiful Sanaa Lathan) works as a maid for the ravingly self-centered, mediocre actress Gloria Mitchell (played with great elan by Stephanie J. Block). Vera also wants to act, but there is little opportunity for African-American performers. Over time, both Vera and Gloria find out just what they are willing to do to be on the silver screen. Rounding out the story are a 1973 talk show appearance by Vera and a 2003 symposium on her career.

Nottage mixes satire, compassion, and serious commentary on racism into a hysterically funny, ultimately touching stew. While her satire can be quite pointed (the people speaking at the symposium are etched in acid), her writing is anchored in compassion and a sweet sense of the ridiculousness of being human. The show is well-directed by Jo Bonney, and among the other performers Daniel Breaker and Karen Olivo deserve particular kudos.

The brilliant Ruined was arguably the most upsetting show I've ever seen; Nottage calibrated the emotional trajectory of the show perfectly. Vera Stark is often delightfully silly, with dips into high-stakes reality, and Nottage's calibration is again perfect. It's as though an elegant ballet dancer turned out to be a great football receiver. It's that range thing, and it's amazing.